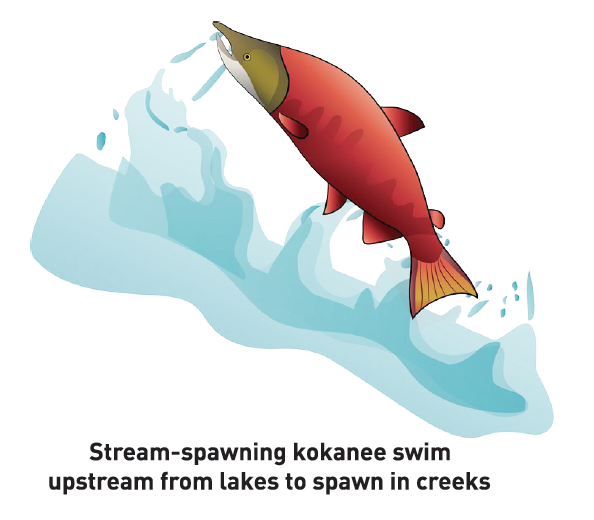 Kokanee are the only salmon that do not migrate to the ocean as juveniles, instead they spend their entire lives in freshwater lakes. This unique behaviour is a result of series of changing conditions that began after the last ice age 1,000 years ago.

As the ice melted, freshwater lakes emerged and sockeye salmon move into the Okanagan. Over time changing lake levels left some sockeye salmon populations without a migratory route to the ocean. The land-locked sockeye were called kikinee by the Okanagan First Nations people. Stranded in freshwater bodies where there is less food available than in the ocean, kokanee adapted and today are significantly smaller than sockeye who migrate to the ocean.

In the Okanagan, two types of spawning behaviour have evolved among the kokanee; populations are either shore-spawners or stream-spawners. Although these populations mingle in Wood Lake, they spawn at different times in the fall and do not interbreed. Shore-spawning kokanee are unique among salmon as they do not need to undertake an epic, upstream migration to breed since their spawning grounds are on the shores of the lake they live in. At Wood Lake, the shore-spawning kokanee spawn along the entire eastern shoreline. The interpretative site at Ribbleworth Falls overlooks active shore-spawning habitat.

Spawning is a relatively brief process for shore-spawning kokanee. When it is time to breed, a large school will rush towards the shore where the females will deposit their eggs that are simultaneously fertilized by the males. To avoid predators, shore-spawning kokanee do not linger at the shoreline. Like all salmon, the kokanee die after spawning. 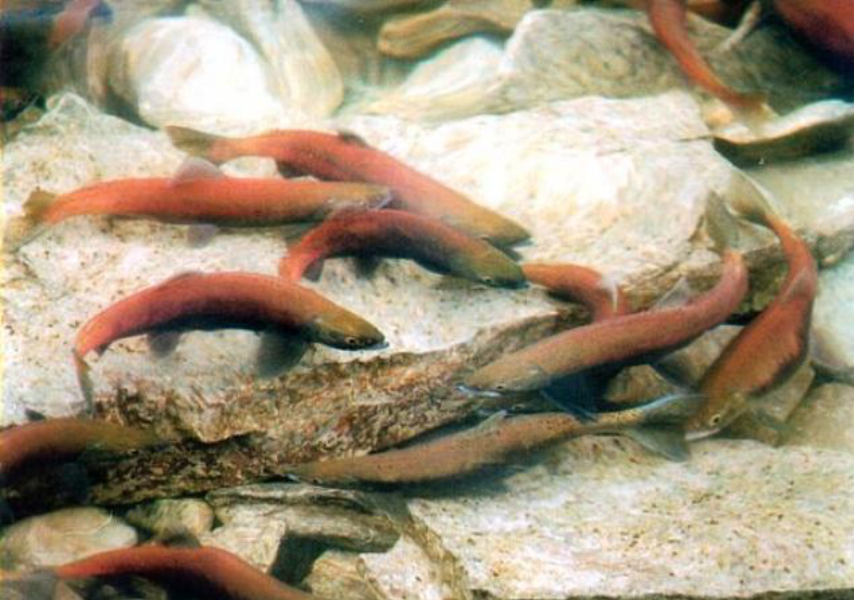 Kikinee is the nsyilxcən name for landlocked sockeye salmon of the Okanagan. Kokanee is derived from this word.

Over a century ago, immediately south of Ribbleworth Falls, a shallow bay with a rock and gravel lakebed provided excellent spawning grounds to shore-spawning kikinee. In late October, Okanagan First Nations families would gather near here, camping while they socialized, fished for the kikinee, picked Saskatoon berries and preserved their harvests for winter. Fish were dried on racks in the sun and wind.

Since Kokanee tend to rush into their spawning grounds in large schools, traditional Okanagan First Nations fishers used a seine or mesh net to catch them in the shallow bay. Nets were woven from a twine made from hemp dogbane (sp‘its‘n in nsyilxcən), which still grows wild on these shores. The nets were held close to the bottom of the lake with stone weights and held upright in the water using floats. A beach fire was used to attract fish and made fishing more productive.

As the shoreline changed over time, the kikinee began spawning in the deeper water and Okanagan First Nations fishers adopted new methods of catching shore-spawning kikinee. Spearing or gaffing fish from a boulder on the shore or a dugout canoe close to shore became the most effective way to fish. Traditionally, a hand-made three-pronged spear was used to lift the fish out of the water. When metal became available this tool was replaced by a gaff, a large metal hook attached to a long pole. A torch of pine sticks and pitch, bound with red-osier dogwood and Saskatoon bush branches, was used to attract fish.