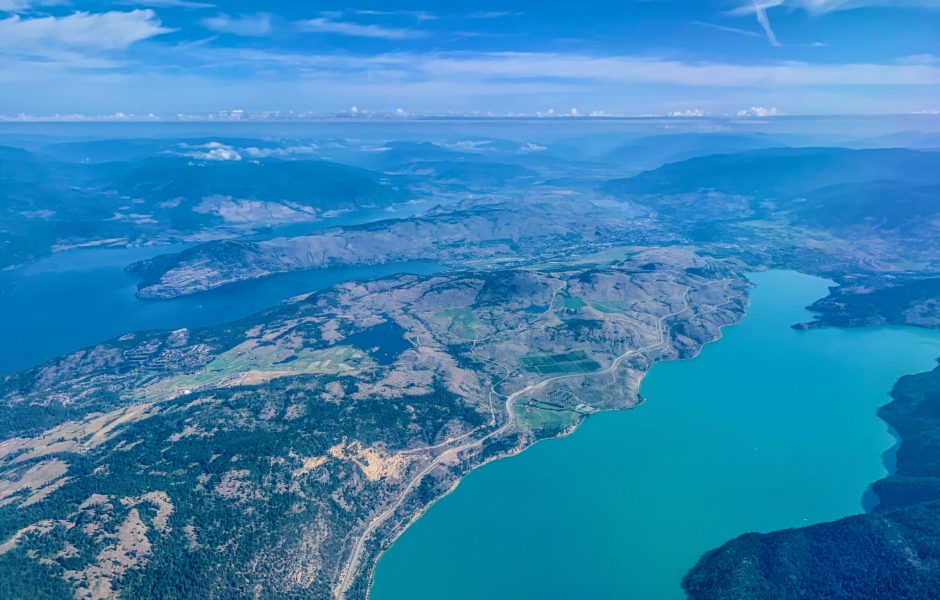 Lake of Many Colours

Visit Kalamalka Lake in late summer or early fall and you will witness a remarkable display of seemingly-supernatural colour. If you visit the lake often, you might notice that turquoise hues of the water shift throughout the growing season. This phenomenon is the result of sunlight reflected by tiny white crystals in the water called marl. Marl is formed when the dissolved calcium carbonate in the lake crystalizes. After forming, the marl slowly sinks into the deep water and stops reflecting light. The lake colour we perceive at any moment is a consequence of the amount of marl near the lake surface. Water temperature plays a critical role in this process since marl forms faster in warmer water.

Marl lakes are rare. Kalamalka Lake owes its calcium carbonate to limestone deposited by the receding Fraser Glacier over 10,000 years ago. A complex set of chemical interactions are necessary to trigger marl to form from calcium carbonate present in a lake. In Kalamalka Lake, the process is initiated in mid-summer when photosynthesizing phytoplankton raise the pH of the lake. Water quality improves during a marl event, as crystallization binds nutrients previously suspended in the water into marl. The reduction in the over-abundance of lake nutrients results in a decline in algae. 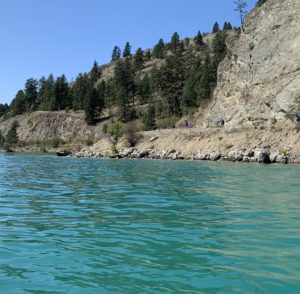 Did you know that a major fault runs down the Okanagan Valley beneath Kalamalka Lake? Each year, seismic activity in the Okanagan Valley Fault Zone results in several small earthquakes on the west side of Okanagan Lake. These events measure less than 4.3 on the Richter scale. During such an earthquake, you might notice the shaking of objects in cupboards and the rattling of doors and windows.

If you explore the area, you’ll observe different types of rock on either side of Kalamalka Lake. Due to the tectonic plate activity over the last 40 million years, the rock on the east side of the lake has moved upwards 10 to 15 km relative to the rock on the west side. There is also scientific evidence of 50 to 100km of horizontal movement along the fault line.

The Okanagan is rich with geological history, and the hills surrounding Kalamalka Lake offer us a link to the distant past. Many of the rocks found here are very old. The rock along the Okanagan Rail Trail on the west side of the lake was formed during the Mesozoic era, or the Age of Dinosaurs, 250 to 66 million years ago. Note how brittle this rock is after being subjected to the movements of Okanagan Valley Fault for tens of millions of years. From the vantage point of Kalamalka Lake Interpretive Site, look to the east across the lake and see the lower hills of Kalamalka Lake Provincial Park. Some of these rocks are even older, forming during the Paleozoic era 542 to 251 million years ago, when plants became widespread and supercontinents drifted apart and reassembled.

See Turtles Head Point across the water to the south, a rocky peninsula that is also part of Kalamalka Lake Provincial Park. The rock here is younger, coming into being during the Cenozoic era, or the Age of Mammals, starting 65 million years ago. Now look over Turtles Head Point to the larger hills of Kalamalka Lake Provincial Park. When these rocks were formed the first flowering plants were appearing on Earth. This was also during the Mesozoic era.

The youngest rock in this region is the basalt that caps the eastern hills and forms a ridge from Lake Country to nearly Vernon. This rock was formed when volcanic magma erupted and flowed down the valley 10 to 15 million years ago. Under the basalt are ancient river gravel deposits that contain placer gold that was mined in the early 1900s. Ask around and most locals will tell you that Kalamalka Lake is deep but what does that actually mean?

Kalamalka Lake sits in a deep U-shaped trench where its water depth varies dramatically. All of the lake’s underwater maximum depths can be found in the southern sub-basin. Here the maximium water depth is 146 metres and the sediment layer on the lake bottom is thickest at 272 metres. This sediment sits on glacier-eroded bedrock which dips 26 metres below sea-level in the southern sub-basin.

Kalamalka Lake is a classic a ‘fjord lake’. The bedrock below Kalamalka Lake was carved by the movement of the Fraser Glacier over 10,000 years ago. It has steep bedrock slopes which visitors can see rising out of the water. The lake’s thick flat layer of sediment came from the silt suspended in the glacial water which settled to the lake bottom.